The Mark I was my first powerful portable. It had the same specifications as the Mark II, just a different case. Definitely powerful, but really ugly. We spent a lot of time looking for suitable cases, but everything we found was too small. In the end time ran out and I had to take my first trip with the computer, so we had to make a case in a hurry. It was ugly, and it was scary. Airport security definitely took interest in it, especially since I put it into a standard plastic grocery bag with some packing tape to hold the corners from ripping it

Here is the original PC case I used to build, install, configure, and test the system. 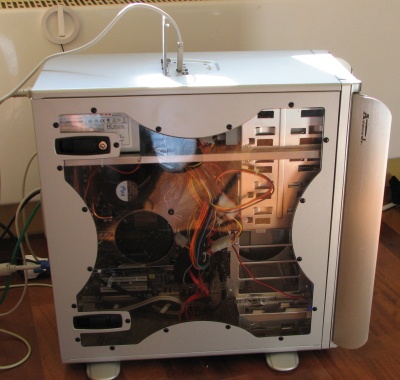 Next I needed to see what the most compact case was that could be built. To do this I measured the components and made models from cardboard. Here you can see the power supply (top left), the motherboard with one video card, and two hard drives. At this point the hard drives were still in aluminum coolers which I later abandoned. I originally abandoned them because of weight and size. I also determined that simpler hard drive cooling fans as can be seen in the final build work just as well. 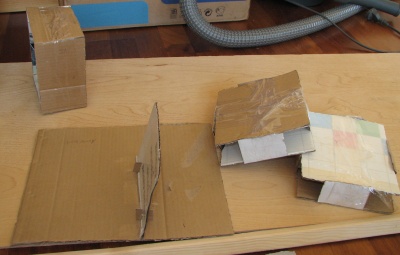 After testing some possible configurations I started to play with real components to test how the wires and cables would affect the planned design. It took many designs and you can see that this differs quite a bit from the final. The motherboard used here is not the actual motherboard, but is a Celeron motherboard from a computer I built in 2001, but is the same size (ATX format). I wanted to play with less expensive parts first. 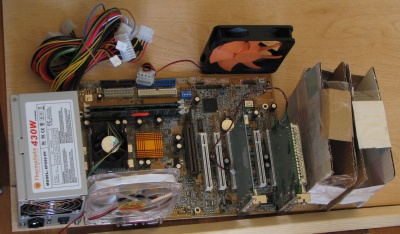 Nearly all of the case is custom, however there are a few useful parts that I needed. Mainly the motherboard mounts and the back plate. Here is the beginning of the salvage of an old desktop case. 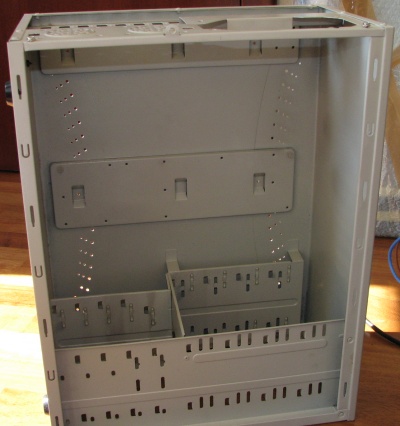 Of course if you salvage a case, likely it came from somewhere. In this case the old Celeron computer mentioned previously was its former occupant. However it also serves some basic functions such as routing for Internet access. So here it is reassembled temporarily until it is given a more permanent home. 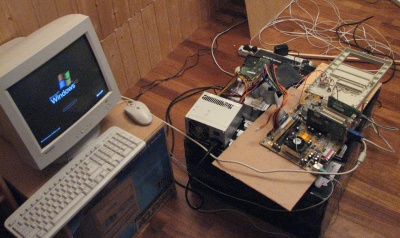 I wanted a nice aluminum suitcase as in the Mark II. However during the building we could find nothing suitable that was an appropriate size. Everything was too small, or did not open in a convenient usable manner. We thought about building a custom plexiglass case. Plexiglass is a static electricity magnet however, and at the time we could not find it in an appropriate thickness. I think that airport security may have liked the plexiglass version though. 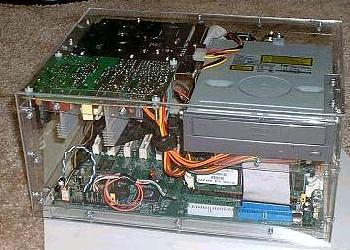 Time was running out, I had to travel soon and I needed the computer. So we started building a case made from wood. Wood is lightweight, and very easy to work with. It did produce a functional case, but also a very ugly one. Here you can see the first attempt at a wooden case. At this point I was still trying to include the aluminum hard drive coolers. 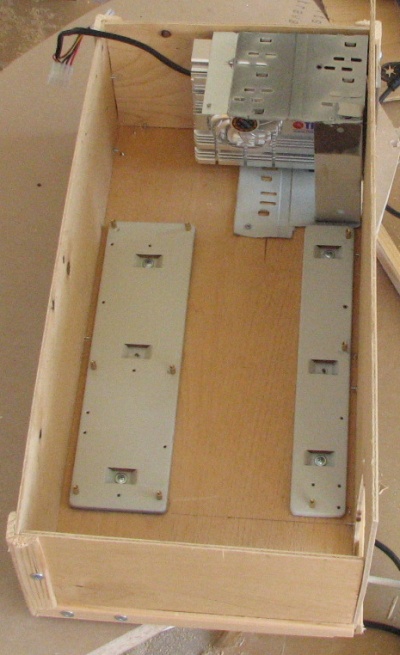 The stock Intel cooler works reasonably well, however I had overclocking plans. Overclocking was of the reasons for choosing this motherboard and processor. I tried a new Zalman cooler in its place. Changing just the cooler resulted in a 5 degrees Celsius drop! That will definitely help with overclocking. 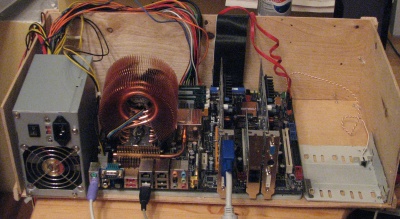 This configuration proved to be too big. After building the complete system it just “looked” too big and I was worried about getting it on as hand luggage. We removed the hard drive coolers and replaced them with slimline ones, and moved the hard drives to the back wall. We took the whole system apart again and modified the case to its current form. 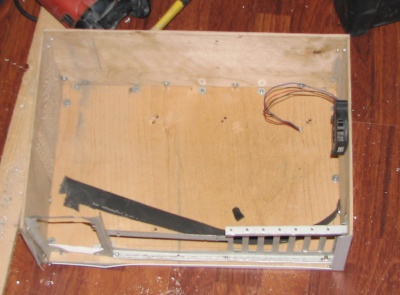 So there it was. I stuck it in a standard plastic grocery bag and added some packing tape to prevent the corners from ripping through. Airport security had some questions, especially about the Zalman cooler. The Zalman cooler is 500 grams (more than a pound) of copper in a radial configuration. When it went through the X-ray it definitely raised some eyebrows and required manual inspection. I told them it was a computer, but they were curious why it was in a wooden box. Finally I showed them my Microsoft business card, and as with so many other situations it worked like magic and they let me pass.

Here is the computer installed in a new location and operating. One problem we knew about with the Mark I was the power supply cables. When packed, they blocked airflow. The only way for the Mark I to operate was to open the case and let things “hang all out”. Ugly, but functional.

Operating on my shelf 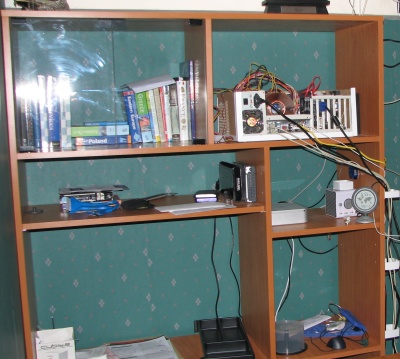 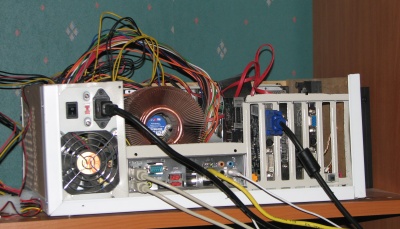 Mark I was not what I had hoped. But it was functional and portable. So it did achieve the required goals. Plans began immediately on a new case. I spent months trying to find a suitable case. Measuring tool boxes and containers of all sorts. I began carrying a tape measure everywhere I went. Finally a few months later I found a store with several cases that might suit. Finally we bought one and began on the Mark II.