Mark II is a new case for the ugly but functional Mark I. The specifications are as follows:

Here is the case closed up and ready for transport. The current version weighs 8kg (17.5 lbs) and will easily be accepted as carry on baggage for air transport. Much of the weight is in the hard drives, the power supply (430 watts) and the CPU cooler (Copper Zalman).

I am already working on ideas to make it smaller and lighter in the Mark III. The Mark II has a full size ATX board because at the time mATX boards with the specifications I wanted were not available. My next version I hope to get down to 5kg or lighter and make the case about 30% smaller using a mATX and integrated video. However I hope to keep dual video as an option, maybe I can use a riser card. 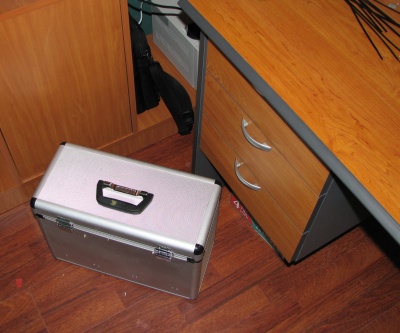 Here is the case with the top open. Some might notice that the right panel is missing. I was still toying with things a bit when I took this picture, but there is a removable right side panel for easy upgrades.

You can see an IDE cable sticking out as a temporary measure for DVD-R access. I plan to mount internal to the case a slimline DVD-R of the type that are used in laptops, or use an external USB in the future. 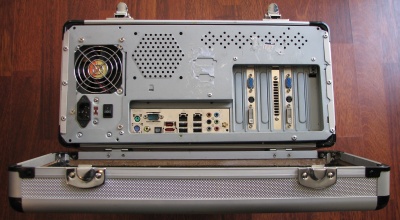 Here is the computer installed in my desk. The cables look a bit messy, but I like them on front for easy access and you can see I have clips to route them between various computers and devices in the office.

In my messy office 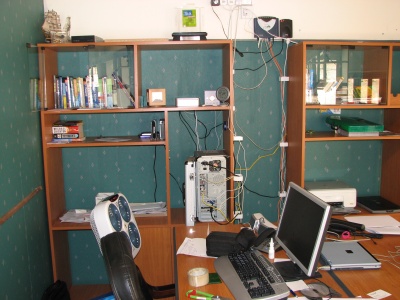 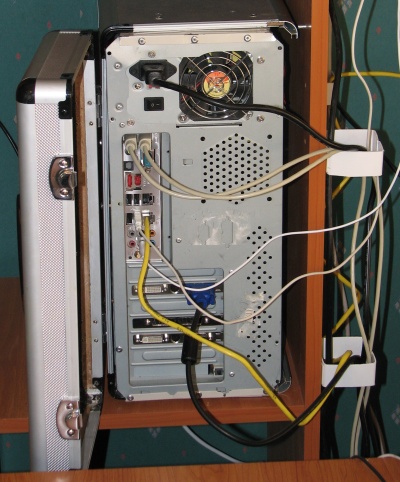 I have not run to many official benchmarks, but based on my experience and my usage patterns it is very fast. Here are the Vista Experience Index scores on a scale from 1 to 5.9:

As I wrote earlier, the Core Duo processors were not available when I built this system. In the Mark III I plan to use an E6700 Core Duo or a Quad Core if the prices drop. At the time the Pentium 960 was the fastest processor available for a reasonable price. In addition, when benchmarking processors the Vista index appears to be overly simplistic, and thus the score is of only generic use. In processor specific benchmarks the 960 and E67600 are fairly close. The E6700 slightly bests the 960 in a handful of tests, although the 960 slightly bests the E6700 in one or two as well. The biggest factor in choosing the E6700 is that the 960 is a blowtorch and consumes factors more power and generates tons of heat. The Vista score misleadingly ranks the E6700 around 5.8.

I will always be chasing a faster processor it seems, however I have learned that as a developer the processor is usually not my bottleneck. Normally the bottleneck is the hard disk, followed by RAM. As you can see I have addressed both well in this system.

*The 3.7 score was achieved using a single graphics card. I do not have the graphics cards chained in a CrossFire configuration in Vista. I suspect the scores would be 50%+ higher in that configuration. In addition, I did not choose the most powerful video cards, but instead opted for reasonably powered ones that were fanless.